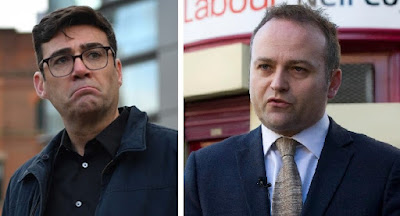 Andy Burnham was engaged in a Twitter spat with one of his own party colleagues on Thursday.  The previous night Burnham had tweeted about the price of rail fares in Greater Manchester, calling for a 'levelling up' to 'London-level fares'. 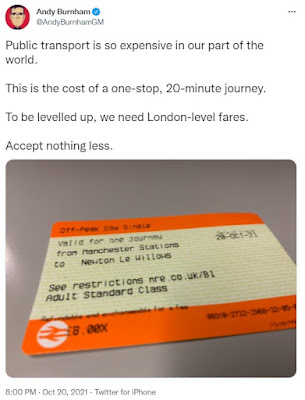 11 minutes later Burnham had to issue a slight correction as he'd got his sums wrong.  It was actually a 15 minute journey.  The following morning he was retweeted by bolshie London MP Neil Coyle who challenged the mayor's comparison.  Coyle doesn't hold back on Twitter, regardless of who he is having a pop at.

Burnham then hit back an hour later.

Burnham is marginally to the left of centrist Coyle, so it's not as if they're on opposite wings of the party.  Infighting is to be expected between the hard left and the centre, but having two moderates going at each other is humiliating.  How Starmer must despair.
Coyle famously nominated Jeremy Corbyn for the 2015 leadership election and then spent four years rueing his decision, getting behind the failed Owen Smith challenge of 2016 and generally bitching about Corbyn.  He has been the MP for Bermondsey and Old Southwark since 2015.
It looks like Coyle's vote is not one Burnham can count on in any future leadership contest.
at October 21, 2021