Absurd gender-neutral terms are becoming more and more commonplace these days.  The term 'fishermen' is no longer used by the BBC, having become 'fisherpeople'.  Cricket will no longer use the term 'batsmen', replacing the word with 'batter'.  Such terms may appear on the surface to be aimed at inclusivity and equality, but that is not strictly true in all cases.
On Saturday The Guardian published an article that referred to 'pregnant people'.  The article, which can be found here, refers to 'pregnant people' and 'breastfeeding people' throughout and not once is the word 'woman' or 'mother' used.  This has nothing to do with inclusivity and equality, this is abject denial of biological fact - only women can give birth. 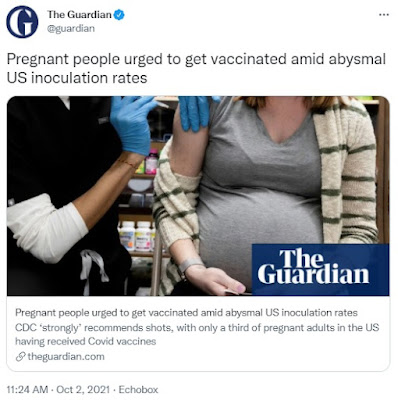 The topic of the article creates an irony in itself.  Pregnant women are being urged to get vaccinated, or 'follow the science', something that The Guardian appears set on ignoring.
The timing of this article is also curious, given that the newspaper had spent the last few days deploring violence against women.  Here are just a few of the headlines featured in The Guardian recently, including one published on the same day as the 'pregnant people' article. 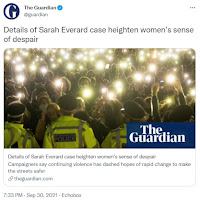 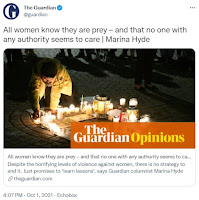 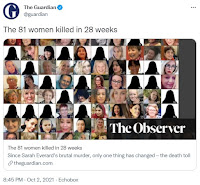 And after all this they go and cancel women altogether.  Keir Starmer and his women-denying colleagues will be proud.
at October 03, 2021