The government's decision to revoke the citizenship of Daesh bride Shamima Begum was always going to antagonise the loony left.  Taking the side of our nation's enemies - or potential enemies - is in their very nature.  The Shadow Home Secretary has practically dedicated her life to it.

Therefore it was no great surprise to see Diane Abbott stand up in the Commons and deliver a furious attack on Sajid Javid...


"If the government is proposing to make Shamima Begum stateless it is not just a breach of international human rights law, but is a failure to meet our security obligations to the international community. Potential citizenship rights elsewhere are entirely irrelevant. Our fundamental freedoms do not need to be compromised; they are perfectly compatible with our safety".

Why is it that people on the left never get remotely animated when British people are being blown up, shot, stabbed and decapitated by Muslim fanatics - or the IRA for that matter?  Diane Abbott immediately denounced the single fatality Finsbury Park van attack as a "terrorist attack", but when dozens of people were being murdered in London and Manchester she dismissed each as merely an "incident".  It's sickening.

Diane's Labour colleague, the self-styled 'feminist' Stella Creasy, had tweeted her own opposition to the decision last night (see below).  Stella's feminist credentials are tainted with more than a little hypocrisy.  When you moan about the patriarchy, equal pay and 'upskirting', but you've never stood up for the thousands of young females raped by Muslim grooming gangs in the UK, your credentials must surely come into question. 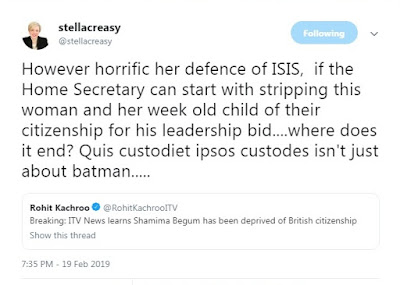 Stella spent the rest of her evening fending off a wave of criticism.  Who could have seen that coming?
at February 20, 2019