Some detailed polling undertaken by YouGov suggests that in a snap election the Tories would extend their lead over Labour by four seats.  The vote share of both parties would dip, the Tories by 4 points and Labour by 7 points.  Of course this is all conjecture and polls have been largely discredited given their failure to accurately predict any major election or referendum since 2014.  For instance the projected drop in the vote share of the main parties is attributed to a rise for the Lib Dems, UKIP and the Greens.  This almost never manifests in an actual election as people revert back to the old parties to prevent the lesser of two perceived evils. 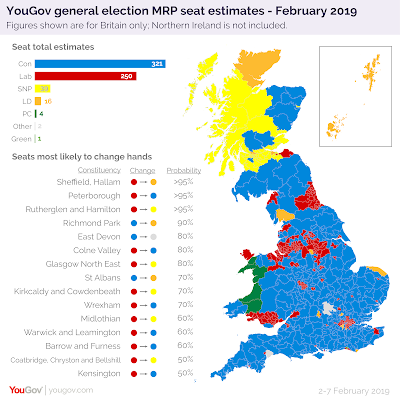 Some of the conclusions are a no brainer, such as Peterborough reverting back to blue and Sheffield Hallam reverting back to Lib Dem - both seats are currently held by morons narrowly elected as Labour MPs, but who are now independents clinging to the gravy train (Jared O'Mara and Fiona Onasanya).  Finally, this is a poll predicting the intentions of almost 50 million people based on the opinions of just 40,000!

However, given that Labour are still keen on polls it makes you wonder why on earth they are so desperate for a general election!