SHUKER WILL BE "DESTROYED"

As if we didn't know it already, the far left loons have taken over the Labour asylum.  With the departure of several Blairite 'scabs' and 'traitors' their aggressive rhetoric has gone into overdrive.  Yesterday the BBC interviewed the chair of the Labour Party in Luton South, the constituency of one of the 'traitors' - Gavin Shuker.  According to Markus Keaney, who also calls himself a 'media spokesperson' on his Twitter page, Gavin will be "destroyed" (see video below).


The use of such language was not lost on Captain Underpants aka Chris Bryant MP, who retweeted the interview.  Bryant has already announced he is staying in the party, but he's clearly not impressed with the lunatics now running the show. 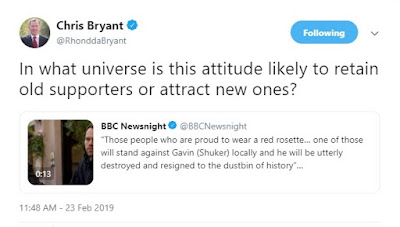