Owen Jones has been in a spin this week, for obvious reasons.  The Great Leader is under attack and Owen has taken it upon himself to launch a one-man smear campaign against those Blairite 'scabs' and 'traitors' who have ditched Labour.

The wee lad certainly appears to have the inside track on forthcoming defections.  The night before the initial 'Gang of Seven' broke away he was busy attacking them on Twitter, singling out Gavin Shuker with typical double standards.  In the early hours of this morning (4am) he began his Twitter assault on Ian Austin. 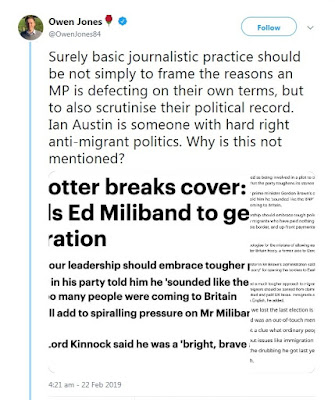 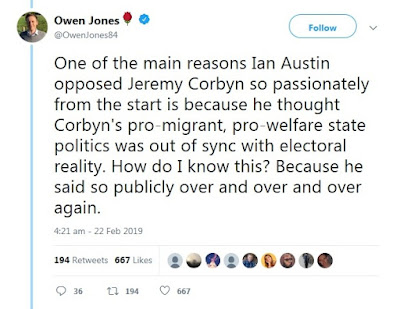 Owen then goes on to tweet a series of quotes from Ian Austin to back up his suggestion that the MP is "hard right" or "racist". 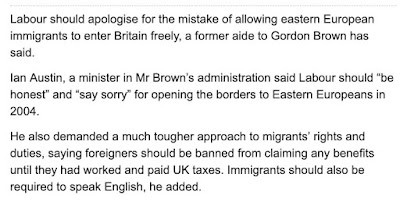 Now some of you will recall that Owen appeared on This Week recently in which he was embroiled in a nasty spat with host Andrew Neil.  Just prior to that he was given a few home truths by Michael Portillo on the same programme.  Watch below...

So, Owen claims that he has never called anyone a 'racist' merely for voicing a concern about immigration.  Please refer to his above tweets about Ian Austin!
at February 22, 2019