TYRANTS DRESSED UP AS DEMOCRATS 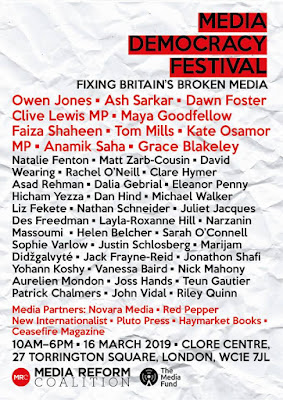 The Media Reform Coalition is another 'independent' thinktank with a political axe to grind.  Look at the speakers and affiliates listed above - it doesn't take a genius to work out that this is a virulently left-wing organisation.  The first two speakers listed are Little Owen and Ash 'literally a communist' Sarkar, two of the loudest Corbynistas in the left-wing media.

So, having established that there is a left-wing media, what 'reform' is this organisation aiming for?  You can look up their brief and vague outline here, but we already know what they are up to.  It's censorship of the media, specifically censorship of media outlets that are not left-wing.  They don't want anyone writing anything positive about the Tories or their policies.  They don't want anyone publishing stories about grooming gangs, suicide bombers or anything negative about mass immigration.

This organisation has nothing at all to do with 'democracy', but everything to do with left-wing authoritarian censorship.  First they came for the journalists...

PS. What is Kate '999' Osamor doing there as a speaker?  One of her most recent encounters with a journalist involved a bucket of water and the threat of a baseball bat.  Yes, so much for media democracy!
at February 15, 2019