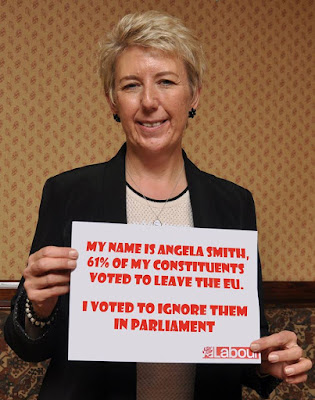 With all the media attention on the Gang of Seven it was vital they did not make a pigs ear of it on Day One.  Step forward Angela Smith, arguably the most odious member of the collective.  Smith is renowned for voting against the triggering of Article 50 - not by itself particularly shocking, but 61 per cent of her constituents voted to leave the EU.

Unfortunately for the Gang of Seven it was Angela who appeared as their representative on Politics Live.  This came in the wake of their press conference in which each of the MPs denounced Labour anti-Semitism.  Angela's appearance on Politics Live couldn't have been worse as she stuttered and dithered her way to a race row of her own...

How Chuka, Luciana and co must have cringed!  Worse still, sitting opposite her on Politics Live was none other than Ash Sarkar, famous for her "I'm literally a communist" outburst and one of Corbyn's biggest tubthumpers.  It was a coup for the Corbynistas.

Whatever Angela Smith was trying to say is open to interpretation, but the general consensus is that she was leading to the words 'funny tinge'.  She later apologised in an equally cringeworthy video on Twitter...


Unfortunately that wasn't the end of it for hapless Smith.  Instead of going to ground for a day or two she appeared on Sky News the following day to give another disastrous interview in which she claimed her Politics Live gaffe was because she was "very, very tired".  There must be lots of ambulance workers out there, veterinary surgeons on call - or just poor unfortunates with mind-numbing insomnia - who don't resort to casual racism when they've had a rough night!

It couldn't have happened to a nicer anti-democrat.  Like her TIG colleagues, Angela won't be giving her constituents the opportunity to re-elect her in a by-election.  Why should we be surprised?  After all, she's already spent the last two and a half years trying to do the opposite to what they voted for in the EU referendum!
at February 23, 2019