Some media outlets are deliberately trying to create an aura of sympathy around the Daesh 'schoolgirl' Shamima Begum.  Rather than run photos of what she looks like now (with hijab) they are only using an old photo of her (uncovered) in an attempt to normalise her as a typically British schoolgirl.  The Evening Standard even ran an editorial urging that she be allowed to return to the UK and treated with "compassion".  Remind us what 'compassion' her comrades showed David Haines and Alan Henning?  What 'compassion' did she show to the many thousands of Daesh victims when she was interviewed recently?  "No remorse" was her message.

Sky News have weighed in with a very leading poll in which said photo is used along with the term "pregnant British schoolgirl".  Despite the loaded bias (she's not even a schoolgirl any more) the poll went the opposite way to which it was intended! 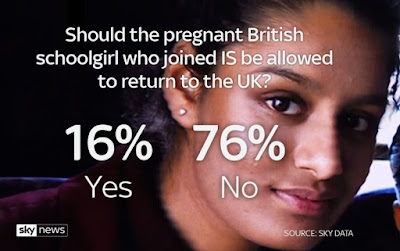