On Tuesday the Government announced a new law that taxi drivers will have to undergo greater checks before licenses are issued.  CCTV will also be fitted in taxis.  This uniformity of standards should prevent situations in which drivers can operate in towns and cities despite having been licensed elsewhere, where checks are less stringent.  This is what has been happening in Rochdale.

We know that in Rochdale taxis have been used by grooming gangs to ferry around abused girls for many years.  With this in mind I started up a petition over four years ago, calling on Rochdale Council to enact a local by-law to force all taxis operating in the borough to have CCTV fitted as a pre-condition of trade.  It attracted over 650 signatures.

I presented this petition to Steve Rumbelow, the chief executive of the council.  After several months he finally responded and claimed there was no record of the petition ever having been received.  His excuse at the time for not enacting the by-law was that the council could not afford the CCTV, somewhat missing the point - these are private hire vehicles, no-one had asked them to fund it.  Secondly, Rumbelow claimed to have asked local taxi firms about fitting CCTV, but they didn’t want to foot the bill either.  So that was that (letter below). 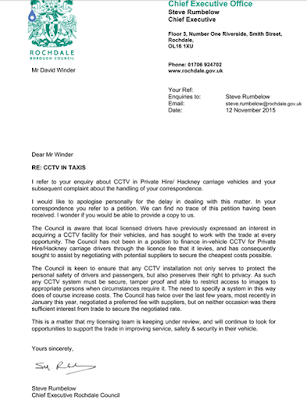 Rochdale Council had clearly decided that public safety was secondary, despite the knowledge that gangs were using taxis to transport their victims to different locations around the borough.  It must have been fairly evident to them by the refusal of the taxi firms to have the cameras installed.

In the four years that have passed since I presented my petition just how many children have been abused and trafficked in this manner while Steve Rumbelow and our Labour council sat on their hands?  Imagine if they had acted on it back then?  The police would not have been able to ignore victims so easily with CCTV evidence to call upon.  So what are we to take from the council's reluctance to deploy the technology, just whose side are Rochdale's Labour council on?
at February 16, 2019