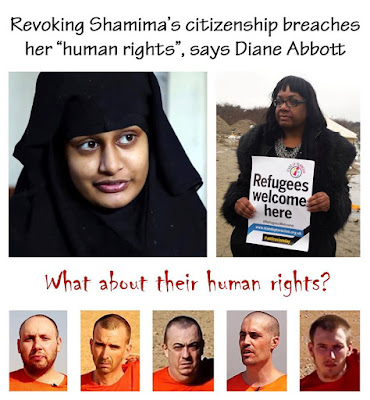 A BTLP original, shared 5,841 times via our Facebook page.  We put this together in the wake of Abbott's speech in the Commons, a speech that came as no particular surprise to anyone.

When the Shamima story broke we all expected Labour figures to spring to her defence, but in actual fact they stayed silent for several days.  It wasn't until Tuesday night when Labour's Stella Creasy condemned Sajid Javid's decision to revoke Shamima's citizenship.  The following day Diane Abbott stood up in the Commons and condemned Javid face to face with the forceful rigour of someone who had dedicated her life to supporting terrorists and people who hate our country.  Then, the day after that, Corbyn himself expressed his support for Shamima.

It's a curious beast 'the left'.  They are born into a nation and share that nation's blood, culture and history.  Yet despite enjoying all the privileges and freedoms won by their ancestors they despise it and work to destroy it from within.  It's treachery of the highest order.
at February 24, 2019