Andrew Neil takes no prisoners and homes in on his prey with a killer mix of thorough research and brutal reasoning.  On Monday he dispensed with his articulate ways and simply chose to denounce the mainstream media as printing 'bollox'.  His Twitter outburst came in response to the overwhelmingly pro-Remain media that had declared Britain would be at the 'back of the queue' following Joe Biden's presumptive victory in the US presidential election.  Ironically 'back of the queue' was a phrase dictated to Democrat president Barack Obama by then British PM David Cameron.  Perhaps they should have paid more attention to this before assuming that another anti-Brexit Democrat would merely dispense with the special relationship.  As it turns out Boris Johnson was among the first world leaders to receive a telephone call from Sleepy Joe. 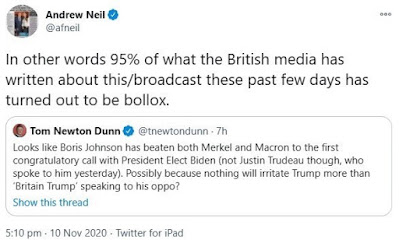 A few minutes later Neil expanded on his initial blunt response to Times journalist Tom Newton-Dunn and quite rightly pointed out that the media agenda was entirely anti-British. 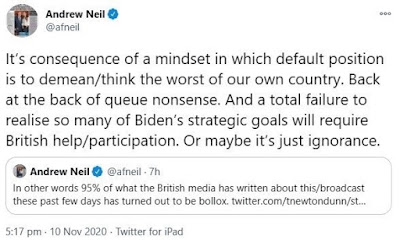 As we have witnessed over the past four years, the mainstream media on Biden's side of the pond is equally repulsed by its own nationhood.  Long live the Donald.
at November 11, 2020