Keir Starmer and co were lightning quick to congratulate Joe Biden on Saturday, regardless of the fact his victory had only been called by mainstream media as opposed to election officials.  The eventual outcome of this disastrous election will likely be decided by recounts and lawsuits, but for the hordes of Trump-haters in the UK Labour Party there was no time to waste.
Sir Squeaky could not get his message across in one tweet, so spread his epic congratulations across five, including several digs at the outgoing president.

The fact that record numbers of women, blacks and Hispanics had back the incumbent was casually ignored by Starmer as he trotted out the pie in the sky nonsense that somehow Biden would herald a utopia of unity.  The fact that Biden signals a return to foreign wars, globalism, mass immigration and a renewed assault on individual freedom and liberty tells you everything you need to know about Starmer and his 'new leadership'.  Note his final tweet, bizarrely written as if he were the elected leader of our country: "I am looking forward to forging a stronger relationship between the UK and US".  The earliest Starmer can look forward to leading our country is 2024, incidentally the final year of Biden's undoubtedly single-term presidency. 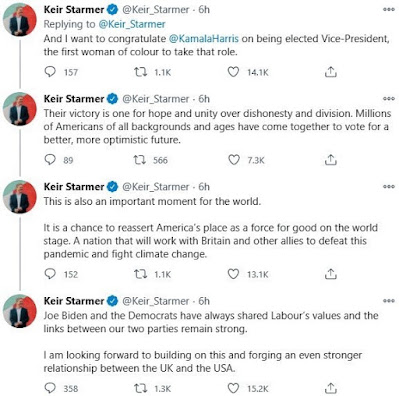 At a time when the two wings of the Labour Party are at each other's throats, the removal of Trump appeared to unite the antagonists.

The fact that a global interventionist can be celebrated by the hard left speaks volumes for how they assess his looming presidency, in particular how he can be manipulated by communists like Bernie Sanders, Alexandria Ocasio-Cortez and, of course, China.
Meanwhile, one of Jezza's comrades showed the utter contempt with which she holds her own country by choosing to praise Biden's links with Ireland - not Britain. 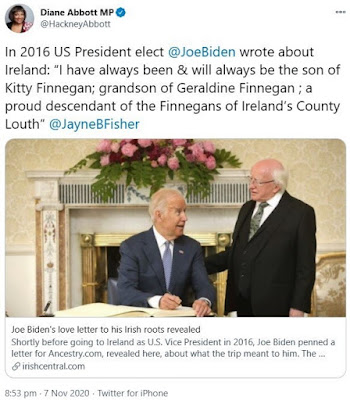 As for one of Trump's noisiest critics, the Mayor of London was surprisingly restrained, although he couldn't help but make a dig about walls. 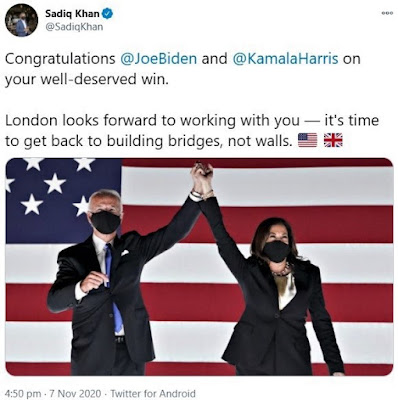