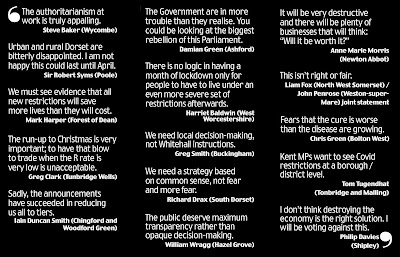 The answer is highly unlikely.  The anti-lockdown Covid Recovery Group may have doubled in membership in recent weeks, but 70 votes is still not going to be enough to defeat the government as long as Labour support these dystopian restrictions.  The Daily Mail claims that up to 100 Tories could rebel when the lockdown tiers are put to a vote on Tuesday, but again this wouldn't be enough to overturn the ayes.  A number of factors would have to come into play for the rebels to inflict defeat and key to this is Captain Hindsight's MPs.
The Tory rebels cannot win on their own, but if enough of their party colleagues abstain and there is a split in the Labour ranks then there is still hope.  Again this is unlikely as only two Labour MPs have spoken out against the current English lockdown and neither defied their whip to actually vote against it.  However, that may change now, given that many Labour MPs represent constituencies dumped in tier 3 and anger is growing up and down the country.  Disgracefully, Keir Starmer himself has said little about the new tiers except to demand more money is spent to support businesses.  He is only too happy to see the country plunge further into the red and our economy obliterated.
Whatever happens on Tuesday, anything less than the biggest rebellion against Boris Johnson to date will be acceptable as the general public begin to wake up to the four month disaster that is being foisted upon them.  Every vote will be vital, including the DUP MPs who backed the Tory rebels last time (despite the fact their party leader is pro-lockdown).  We live in hope, or, as the lockdown enthusiasts would prefer - we merely exist.
Conservative MP Desmond Swayne reiterates lockdown opposition
at November 28, 2020