Following Boris Johnson's capitulation to the lockdown lobby, Captain Hindsight and his comrades have pounced on the decision with a chorus of 'told you so' and howls of criticism.  Andy Burnham and Mark Drakeford responded to the extension of the furlough scheme by lashing out at Rishi Sunak.  Burnham's 15 minutes of fame have clearly gone to his head as he now sports a cartoon caricature of himself on Twitter. 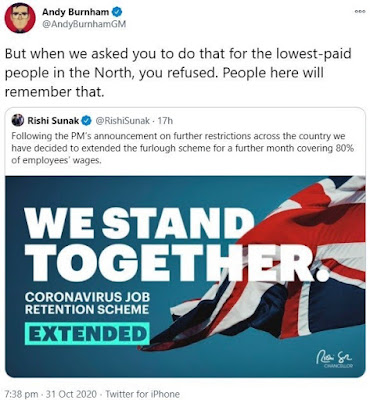 What both Burnham and Drakeford refuse to acknowledge is that a national lockdown was out of the question at the time they were pleading for more money.  Burnham demanded extra funding that was not given to Liverpool and, if granted, would have been grossly unfair on other regions.  A blanket lockdown has simplified the furlough extension on a level playing field, but will of course plunge Britain even further into the red.
In Drakeford's case he made the unilateral decision to lock down Wales before securing funds from central government.  It was an arse about face move that was quite rightly rejected by a government who, at that time, were not interested in national lockdowns.  Drakeford made his bed and unfortunately for the Welsh, he had to lay in it.

As for Captain Hindsight, he has naturally declared that he was right all along. 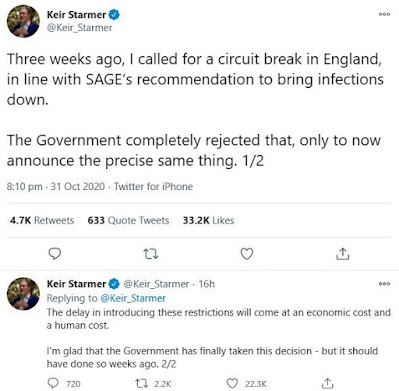 Starmer is right about one thing - there will be an economic and human cost.  But it is not because the government didn't listen to him or SAGE, it will come as a result of the lockdown itself.  This nonsense has to stop or this country will never recover, not in Starmer's lifetime of those of his children or their children.  They'll be OK though.  It's the workers who will suffer.  Labour?  Don't make us laugh.
at November 01, 2020