Two Labour frontbenchers are being mocked over their reaction to the US presidential election.  Last week Emily Thornberry told LBC Radio's Iain Dale that 'every single vote must be counted, every vote is equal'.  Dale responded by making the point that the vote was currently split 52-48, 'now where have we heard that before?' he quipped.  Thornberry later appeared on Peston and denounced Boris Johnson and Dominic Raab for not criticising Trump and said they should be 'standing up for democracy and Western democracy... this is the largest democracy in the world and the leading democracy and we have a duty to defend it'.  That's right - a woman who spent years trying to reverse the democratic result of the 2016 referendum had the audacity to lecture others about defending democracy.
Another senior Labour figure making a similar stance was Dave Lammy who said that there should be 'no exceptions' when it came to those 'attacking democracy'.  Sadly for Dave our memories are not that short and we recall only too well his refusal to accept the referendum result.  He was one of the Labour rebels who refused to vote for the triggering of Article 50 in 2017, but had argued for a second referendum as early as 26 June 2016 - just three days after the referendum.  Labour's official Leave campaign joined in the criticism of Lammy and pointed to that very article... 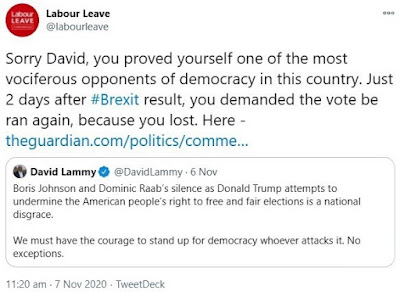 How fitting that Thornberry and Lammy's refusal to accept a democratic outcome has now come to bite them on the arse!
at November 09, 2020