Lisa Nandy has refused to commit Labour support for the government's four month tiered lockdown for England.  Speaking to Andrew Marr on Sunday, astonishingly she suggested that the draconian proposals may not be 'sufficient'.  She didn't make any alternative suggestions.  However, she added that "we're certainly not going to set our face against health restrictions that are recommended by SAGE".  Of course it's inevitable that Labour will whip MPs to back the proposals, riding to the rescue of a government that is set on completely destroying the British economy.
Also appearing on Marr was Nandy's opposite number the Foreign Secretary who was prompted by his interviewer to warn of a 'third wave'.  Lurid headlines swiftly appeared attributing the new scaremongering term to Dominic Raab, except he doesn't actually use it - Marr does.  This was a shameful attempt by the mainstream media to perpetuate the fear they have helped inflict on people all year.  Thankfully a growing number of people are now waking up to it.
The term 'third wave' may well be deployed in the next couple of days by government ministers as they seek to win Tuesday's vote, but hang on a minute - what happened to the second wave?  The prophets of doom in SAGE told us that the second wave would last months, result in up to 85,000 deaths and a four month lockdown would be required.  However, as with their '50,000 cases a day by mid-October' claim, this was clearly more scaremongering.  We now know that the virus was already in decline at the beginning of November and is now in free fall, although we do have the strange anomaly that deaths remain stubbornly high (see below screenshot from the government's coronavirus website). 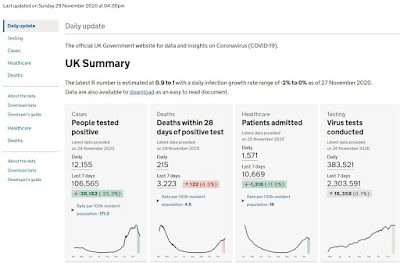 With the virus shrinking and hospital admissions dropping, the slight upward curve in deaths could be the result of a lag or perhaps something more sinister.  Going into the flu season we can certainly expect deaths that would normally be attributed to flu will now have Covid 19 on the death certificate.  This tactic could boost Covid death rates by up to 20,000 depending on the severity of the season and therefore sustain the fear required to keep imposing restrictions.
The problem with that is two-fold.  Firstly, if infections and hospital admissions keep falling a plateau or rise in deaths will stand out (as it does now).  Secondly, questions will be raised if figures later show that the flu season accounted for mysteriously few deaths.
What is imperative for the government right now is to turn around the biggest downward graph - new positive tests.  Mass testing will certainly help and the proposed roll out to all tier 3 areas will provide a boost in those figures.  More testing equals more cases, it's that simple.  Mass testing in Liverpool coincided with a spike in 33,470 positive cases, although this was a short-lived increase and the following day cases fell back below 30k.
There is clearly no justification for a four month lockdown.  It's not a 'cure' - it's a death sentence for the economy, small businesses, the hospitality industry and people's health. 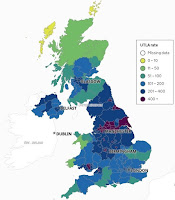 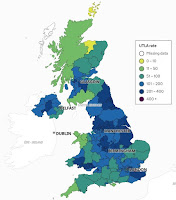