Jeremy Corbyn was readmitted to Labour on Tuesday evening.  The decision was reportedly made by  a panel consisting of five members of the party's National Executive Committee.  Jezza's suspension lasted just 19 days and his reinstatement looks set to avoid a damaging split.  Corbyn responded with a tweet about an hour after the news broke. 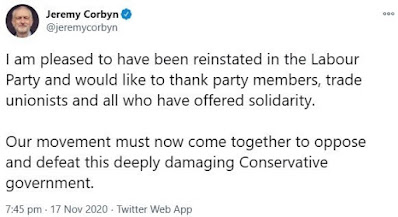 The Socialist Campaign Group of Labour MPs issued a tweet minutes later, but Richard Burgon was its first member to broadcast his undying loyalty (beating Nadia Whittome by nine minutes). 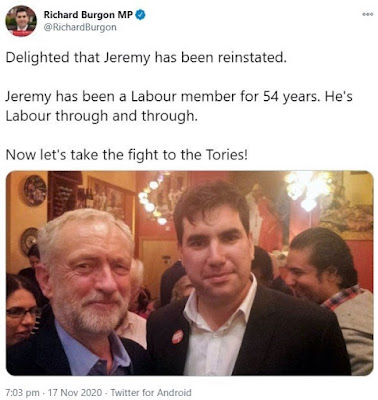 While many on the hard left have expressed delight at the decision, some already on the outside have been less vocal.  Chris Williamson, who left the party last year, had been hoping to start up a new socialist party with Corbyn on board.  He has yet to respond to the reinstatement.
Meanwhile, some on the moderate pro-Starmer side have reacted with dismay.  Margaret Hodge was among them.  She was one of the few Jewish moderates who managed to survive the left's 2019 parliamentary purge.

The Jewish Labour Movement also condemned Corbyn's reinstatement, as did the Board of Deputies of British Jews.  The two groups both released official statements.  The Board of Deputies had earlier rebuked what it referred to as Corbyn's 'non-apology', a statement that Corbyn released prior to his reinstatement.  The Board urged Labour to consign Corbyn's statement to the 'dustbin of history'. 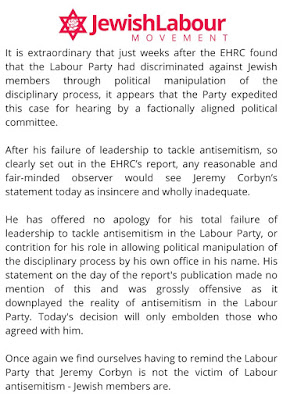 Keir Starmer has written a lengthy thread on Twitter, although in it he only refers to Corbyn by name once.  Sir Squeaky was damned if he did, damned if he didn't.  Whichever path he chose for his predecessor, his battle with the hard left would be far from over.  They are still on board, for now, but they are not going to make it easy for him.
at November 17, 2020