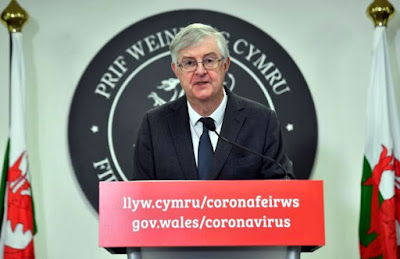 Disinformation and misinformation have been key to the fearmongering campaign waged by governments across the UK during the pandemic.  Whether it be the Tories in Westminster or the socialists in Cardiff and Edinburgh, the misrepresentation of data has been used to maintain fear.  After all, a population that lives in fear is easier to control.  And despite countless dodgy graphs presented by SAGE scientists, the mainstream media gives them a free ride and they are never challenged when the information is proven to be either false or wildly exaggerated.
Similarly the First Ministers of Scotland and Wales fail to receive the scrutiny that so-called journalists ought to be deploying now that the facts about this virus are so publicly available.  Take Mark Drakeford's press briefing on the 27th of November.  During that broadcast he claimed that the reproduction rate of the virus in Wales 'could be as high as 1.4'.  However, five days later a report demolished that claim.  The Technical Advisory Group are the Welsh verson of SAGE and advise Drakeford's government.  Their report, dated the same day as Drakeford made his claim, stated: "As reported by SAGE, the R value in Wales is estimated to be between 0.8 and 1.0 (the same as last week)".
This huge discrepancy was reported by the Daily Post in North Wales, but in Drakeford's following press briefing not one journalist asked him about it.  The mainstream media are so complicit in this conspiracy they are acting like state media.
So why did Drakeford lie about the R rate?  Primarily to justify his lockdown measures, a by-product of which is to maintain fear.  That press briefing took place a week before the hospitality sector was forced to close by his alcohol ban, something which is only being voted on in the Senedd today - four days after the industry shut.  This is in itself an affront to democracy and to all those landlords and landladies who may never open their doors again.
The puritanical spite of Drakeford was highlighted again last week when a TV advertising campaign on behalf of Welsh drinks producers was effectively banned.  With positive cases likely to rise again in the New Year, the direction of travel for the First Minister appears to be full-on prohibition.  By closing pubs he will have forced people to socialise indoors where there are no control measures in place.  But this isn't the only reason that cases are likely to spike again.
In addition to the Christmas 'dispensation' on family gatherings, Wales is currently rolling out the new rapid result lateral flow tests.  This will boost the case rate far more than indoor gatherings as mass testing equals more cases.  Make no mistake, Wales will be closed again in January, and ironically the arrival of the vaccine has only increased this prospect.  Drakeford will be keen to make the most of his draconian powers while he can still justify them.
Two petitions have been presented to the Senedd in regards to the alcohol ban and anyone in the UK can sign.  Click below to add your signature and register your disgust at Drakeford's all-out assault on the hospitality industry.  Both petitions need to collect 10,000 signatures in order to qualify for a Senedd debate. 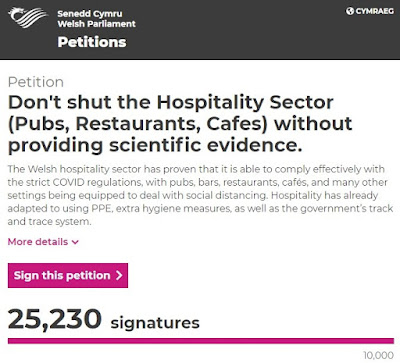 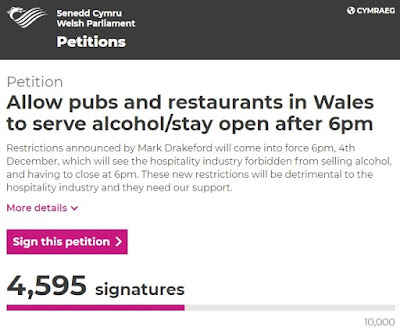