PLANE CRIMINALITY OF THE LEFT

Priti Patel has clashed with the Labour left again, this time over the deportation of foreign criminals.  Labour's Clive Lewis wrote to the Home Secretary on Monday calling on her to cancel a deportation flight to Jamaica carrying around 50 individuals.  The charter flight was due to carry at least three murderers, numerous rapists and drug dealers, as well as convicts guilty of manslaughter, attempted murder and firearms offences.  There was no mention of their crimes in the letter penned by Lewis and co-signed by more than 60 of his colleagues, plus five Liberal Democrats, three Plaid Cymru and - predictably - Caroline Lucas of the Greens.
Instead Lewis makes a series of lame arguments for keeping them on our streets, including the threat of coronavirus during their flight and, ironically, the possibility they may become victims of crime in Jamaica!  The letter is signed by many of Clive's comrades in the Socialist Campaign Group, including Corbyn, Long-Bailey and McDonnell, as well as numerous peers and moderates of Starmer's new so-called 'patriotic' party.  The letter can be seen below (click to enlarge). 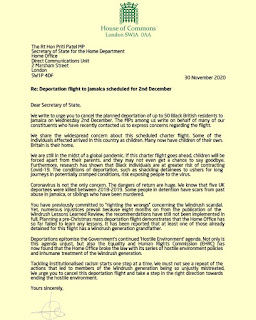 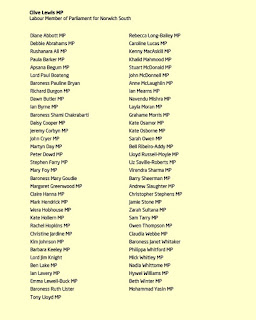 The Home Secretary responded swiftly to the letter and was clearly spitting feathers at the treacherous mentality of people trying to keep serious criminals on Britain's streets.  She pointed out that the deportations were in line with the 2007 UK Borders Act, a piece of legislation passed under the last Labour government.  Her letter can be seen below. 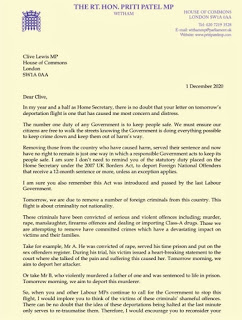 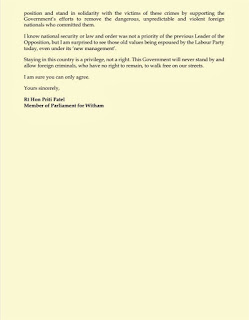 Lewis wrote another letter on Wednesday, gloating after the majority of the deportations were halted by a last minute legal challenge.  It's reported that just 13 seats were eventually filled on a flight that must have come at great expense to the British taxpayer.  At least one murderer and two rapists were among those reprieved and now back on our streets thanks to the efforts of politically-motivated lawyers.
This limp-wristed nonsense has to stop.  The Tories have to start living up to the immigration rhetoric they have spouted for years.  Tens of thousands have sailed across the Channel this year and very few of them will ever be removed, encouraging even more to make the journey.  If laws have to be changed in order to protect our borders and deport fake refugees and criminals then the Tories have the numbers to pass the legislation.  In four weeks time this country should no longer be subject to EU law, there is simply no excuse.
However, much to the frustration of Priti Patel, it's more than likely that the liberal incumbent of Number Ten would prefer to kick this issue into the long grass along with the discussion of grooming gangs that has now been awaiting a debate for 268 days.  Ignore at your peril, Boris.
Minister attacks Labour stance on deportations
at December 03, 2020