Julia Hartley-Brewer sparked a Twitter meltdown last night as she appeared on BBC's Question Time.  She drove the metropolitan elite to distraction with her views on Brexit, lockdowns and Black Lives Matter.  Even before the programme was broadcast her appearance was condemned.  Question Time tweeted an introduction for each of their guests and Hartley-Brewer's attracted 160 comments, while Labour's Wes Streeting received 11 comments, Malcolm Turnbull 12 and politics professor Anand Menon just three.  Tory minister Robert Buckland was a late edition to the line-up. 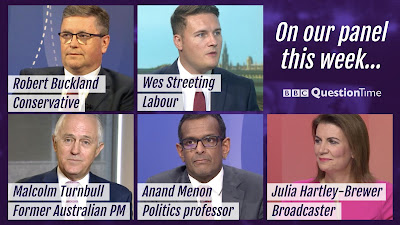 As a vociferous Brexiteer, Hartley-Brewer was guaranteed a frosty reception by the #FBPE Twitter mob, but she compounded their metropolitan anger by providing some home truths about lockdown restrictions and BLM too.  She clashed with Buckland, having quite rightly pointed out that Covid infections in England were already levelling off prior to the November lockdown.  She pointed to recent ONS data to back up her argument, at which point Fiona Bruce interrupted and unsuccessfully tried to silence her.
The final topic for debate was inevitable.  This was the first edition of Question Time since football fans were allowed back into (some) football matches and the taking of the knee had not been well received.  So began the latest media exercise in pleb-bashing, singling out once again the fans of Millwall, while briefly mentioning Colchester United and absolutely no reference to West Ham United - who, as a Premier League club, appear to be subject to a conspiracy of silence that seeks to portray anti-BLM sentiment as an isolated phenomenon limited to the lower leagues.
As with her lockdown views, Hartley-Brewer was out on her own again.  She defended fans' right to boo a political gesture that had no place in football and again she was challenged by Bruce.  Labour's Wes Streeting responded by joining his BBC comrades in labelling the Millwall fans 'racist'.  Meanwhile, Buckland hung his cabinet colleague George Eustice out to dry as he too condemned the Millwall fans.  Eustice was heavily criticised in the mainstream media when he had the audacity to point out that BLM was a political movement and not one that should be applauded.  Such sentiment is clearly 'dissident speech' in the eyes of the media.
While Hartley-Brewer enjoyed a fair amount of backing on Twitter, she was generally denounced with the usual diatribes of 'far right' and 'racist' while one snowflake remarked that when he hears her name he has to 'start breathing through a bag'.  What a woke cesspit.
Click below for some of Hartley-Brewer's best bits.
Brexit
Lockdown clash with Buckland
Football fans and BLM
at December 11, 2020