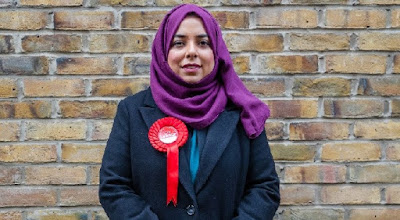 Labour's Apsana Begum will stand trial next month on three charges of housing fraud.  The Poplar and Limehouse MP appeared before Westminster magistrates on Tuesday and pleaded not guilty.  She is accused of lying about her housing status in order to obtain a council flat in Tower Hamlets, reportedly leapfrogging 18,000 others to the front of the waiting list.  She will now be tried by jury, with her next court appearance on January 5 at Snaresbrook Crown Court.
Remarkably, Begum still retains both her party membership and the party whip.  This is at odds with the treatment of her hard left colleague Claudia Webbe who faces trial in March.  Webbe was stripped of the party whip upon being charged with harassment.  Why the double standard Sir Keir?
at December 08, 2020