DIANE SAYS EVERYTHING IS FINE

Diane Abbott appeared on Sky News earlier today and gave a Comical Ali-style interview in which she rubbished media claims of disunity.  Her claim that the party is "determined to unite behind Jeremy Corbyn" bears no resemblance to the slow motion car crash that is Labour's 2019 conference.

Earlier in the day Diane was photographed walking past Tom Watson with not so much as a nod.  So much for unity Diane! 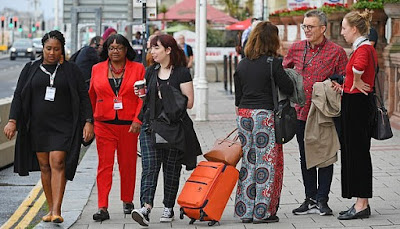 As for troublesome Tom, he wasted little time in returning to his mischief-making and headlined a fringe event held at Brighton's Odeon cinema (see below).  He was joined at the anti-Brexit rally by fellow front benchers Emily Thornberry and Keir Starmer (who themselves spearheaded yesterday's anti-Corbyn protest).  Labour MPs Hilary Benn, Annaliese Dodds, Rosena Allin-Khan and Anna Turley also addressed the event, as did the odious Richard Corbett, Labour's top MEP.  Corbett was filmed earlier this year clinking champagne glasses with EU fanatic Guy Verhofstadt as they celebrated May's capitulation. 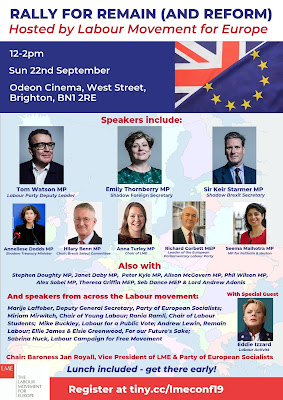