Labour has today revoked another policy from its 2017 manifesto (despite being only halfway through the Parliamentary term).  The party will now campaign on a more familiar platform of open door migration.  This was their manifesto commitment in 2017.

"Freedom of movement will end when we leave the European Union. Britain’s immigration system will change, but Labour will not scapegoat migrants nor blame them for economic failures".
2017 Labour Manifesto

Labour is now committed to extending freedom of movement, rather than scrapping it.  This is sure to go down well in the Labour heartlands where the working classes voted Leave en masse under the impression that migration would be curtailed.  But then Labour has already committed itself to ignoring their Leave vote altogether by holding another referendum. 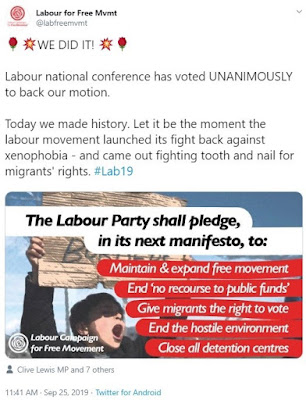 It's an own goal short term, but a dedication to migrants in favour of natives is a trait of the hard left throughout the Western world.  It's no surprise that President Trump comes under sustained fire for his stance on migration from hard left elements in the Democrats.  An overwhelming number of migrants vote for parties such as the Democrats because that is the party for them.  Migrants also have more children, hence more Democrat voters for the future.  The logic is the same for Labour, and also migrant-friendly leaders around the world such as Trudeau, Merkel and the lunatics running the Swedish asylum.  No wonder then that Labour want to give migrants the right to vote.

The full text of the motion passed at the conference today is as follows:

Free movement, equality and rights for migrants, are socialist values and benefit us all.

Confronted with attacks on migrants – from the racist Hostile Environment to the Conservatives’ Immigration Bill that plans to end free movement and strip the rights of working-class migrants – we stand for solidarity, equality and freedom.

Scapegoating, ending free movement and attacking migrants’ rights are attacks on all workers. They make migrant workers more precarious and vulnerable to hyperexploitation, pressing down wages and conditions for everyone. They divide us, making it harder to unionise and push back.

Labour offers real solutions to fix the problems which are unfairly and incorrectly blamed on migrants themselves: public funding for good jobs; homes, services and social security for everyone; scrapping anti-union laws to support workers organising for improved conditions and wages. Migrant workers are already central to trade union campaigns beating low pay and exploitation, in spite of prevailing attitudes and Tory legislation.

Labour will include in the manifesto pledges to:

One MP who voiced strong support for the motion was Rosie Duffield.  This is despite her own admission that her Canterbury constituency has a "lot of asylum seekers".  Well, Rosie, with this policy of open door migration your constituents would be getting a lot more asylum seekers if your party ever came to power.

With a tiny majority of just 187 this is sure to help with her re-election bid, not.  This will be an interesting one to watch in an election and much will depend on the timing, Brexit and whether or not the Tories and Brexit Party cut a deal.  If Britain does not Leave in October and an election follows, the Brexit Party will almost certainly ensure Labour retain the seat.  Canterbury is a prime example of a seat which would benefit from a Leave alliance, but will Nigel and Boris see the light?