Piers Morgan has been embroiled in a second Twitter row involving a Labour MP.  Last week he was told by Bermondsey MP Neil Coyle to "go f*** yourself", ironically in the same week Labour MPs were creating hysteria over language used by Boris Johnson.  Morgan has continued the spat this morning by telling Coyle:  "You're a disgrace to your constituents and to Parliament". 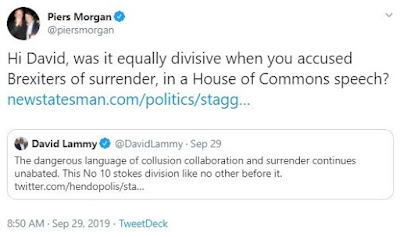 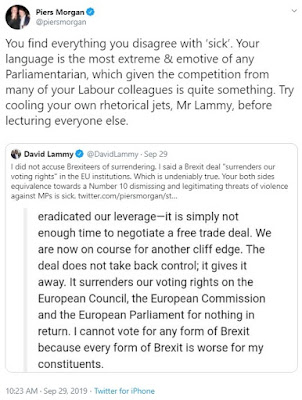 Lammy then took the dispute down a bizarrely surreal avenue of pastry products.  Note that Dave uses the waving hand emoji at the end of his tweet, indicating that this was a 'dropped mike' tweet aimed at closing the argument.  Morgan struck back in fashion and it was Dave who was silenced. 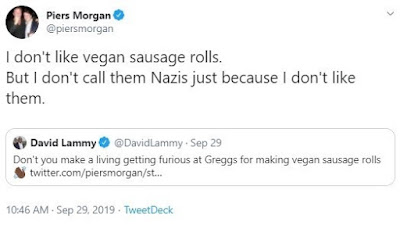 Morgan kept up his attack this morning and eventually he obtained the rarest of responses from a politician - an admission that they were wrong.  That this was Dave Lammy is an astonishing feat. 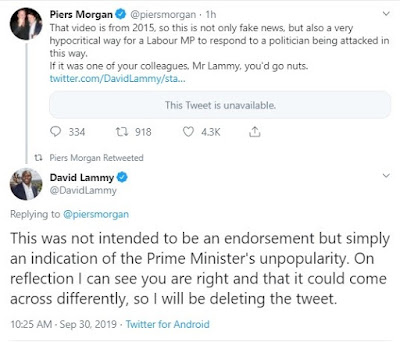 Although he has now deleted the tweet, we can reveal that it was a video of Boris Johnson being pelted with missiles to which Lammy commented:  "Boris Johnson as popular as ever".  The tweet and video can be seen here.  Eagle-eyed Morgan noted that the video was not from the current Tory conference, as clearly inferred, but from 2015.  It was also a further display of rampant hypocrisy at a time when Labour are attacking the government over 'dangerous language'.