Remember all those Tory MPs and right-wingers that marched outside the Labour conference last week?  No, because it didn't happen.  While we're constantly being told that the Tories are vile and they are engaging in hateful politics, this is how the left greeted the Tory conference in Manchester today. 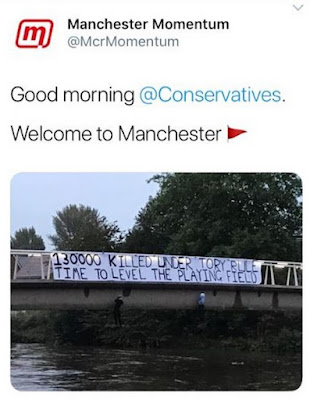 The above tweet was later deleted.  A spokesman for Momentum denied that the group was behind the banner and told Sky News:  "Manchester Momentum weren't behind the banner, they tweeted about it and then deleted the tweet because they realised it was inappropriate".  Greater Manchester Police are reportedly investigating, but this is not the first time that a Tory conference in Manchester has been 'welcomed' in this manner.  A very similar threatening banner was displayed in 2017. 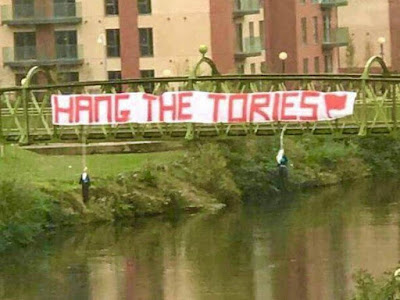 Former Labour MP and leadership contender Andy Burnham has condemned the latest incident in his current role as Mayor of Greater Manchester.  However, there's a deafening silence from the same people who have engaged in hysteria over such words as 'surrender' and 'humbug' recently.  These banners are calling for people to be murdered, but there has not been a jot of condemnation from the likes of Jeremy Corbyn, Diane Abbott or their apologists like Owen Jones and Ash Sarkar.  Only two days ago Little Owen tweeted that "People will be beaten up, and probably killed, because of this rhetoric", referring to a Daily Mail headline.  However, he has nothing to say about these banners, but funnily enough he is there in Manchester tonight loitering around outside for some unknown reason. 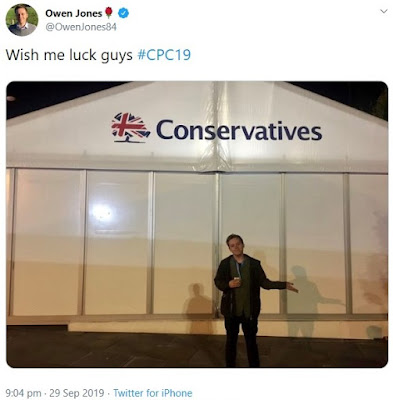 Again, why are leftists hounding the Tory conference?  Why did Labour front bencher Angela Rayner address the protest outside the Tory conference?  Why was it also attended by other Labour MPs, including Laura Smith and Laura Pidcock, whose constituencies are not even in Greater Manchester ?  Why did Rayner appear to tweet a picture tonight of Boris Johnson walking past her as she gave him the cold shoulder?

This is not your conference guys.  No-one from the Tories bothered you in Brighton, but please carry on pretending that the Tories are the aggressors while you behave like this.  Let's also remember that the Parliamentary Labour Party vetoed a short Commons recess for this conference to go ahead unimpeded (as their own did).  Who is the nasty party again?
at September 29, 2019