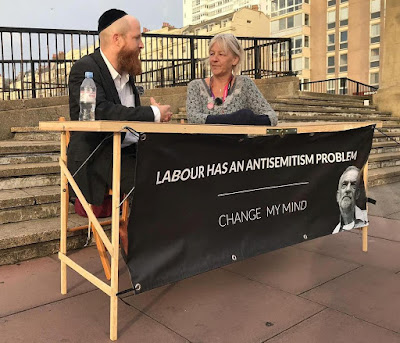 "Racism doesn't have a political home, it can belong anywhere".
Joseph Cohen

Jewish activist Joseph Cohen headed down to the Labour conference in Brighton earlier this week and set up a stall outside.  Cohen makes it known that he is an anti-fascist, although as a self-confessed Zionist many on the left would obviously dispute his credentials.  One thing is for certain - the lad has some bottle.  He humiliated famed Islamist and Daesh recruiter Anjem Choudary a few years ago and recently set up a stall in a Muslim area of Luton with a banner that read:  "I support Israel - change my mind".

Outside the conference he discussed Labour's anti-Semitism problem with independent journalist and Labour member Lizzie Fletcher.  After the interview was published the Canary denied she worked for them and called Cohen a liar.  Bit touchy.  Is it 'cos he's Jewish?
at September 28, 2019