Diane Abbott has reported Alan Sugar to Twitter for being "disrespectful" and "offensive".  She highlighted several examples of memes and tweets he's posted about her, including a poem. 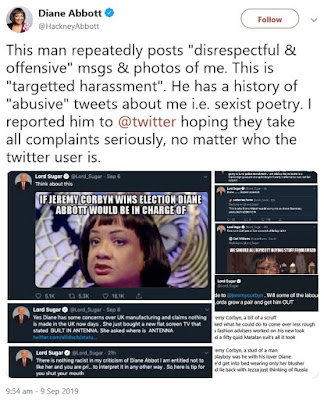 Lord Sugar was a Labour peer until 2015 when he resigned alleging that party policy was slipping back into socialist territory.  He has since become a huge critic of Jeremy Corbyn and his fellow commies to the extent that he backed the Tories at the 2017 general election.  Sugar hasn't directly responded to Abbott's tweet, but then she probably has him blocked anyway.  This is her usual response to criticism and she was one of the first MPs to block our Twitter account.  It's also how she responds to members of the public who dare to speak to her. 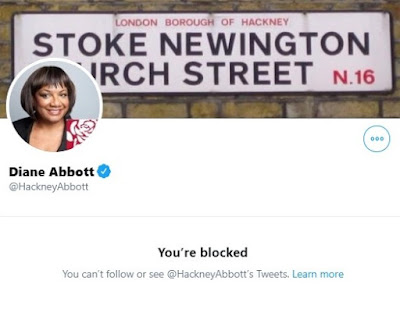 Most right-minded British people have found some of the things Diane has said and written over the years deeply offensive, but we're clearly made of sterner stuff.  That's just life Diane, people will always say things you don't like or appreciate.  Sticks and stones Diane...
at September 11, 2019