Among the assorted loons loitering around outside the Labour conference are the perennial devotees of Free Palestine.  One banner has provoked a lot of controversy over the last three days. 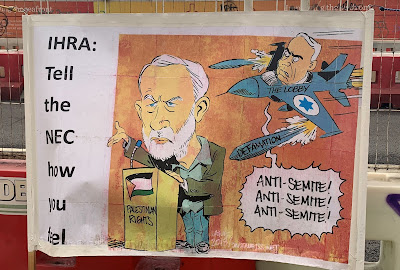 Whether or not what is depicted can be called anti-Semitism itself is debatable, but what is not disputed is that the artist himself is dedicated to offending Jews.  Below are some of the other works of the cartoonist Carlos Latuff. 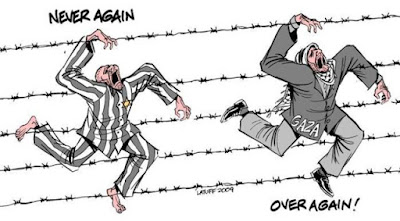 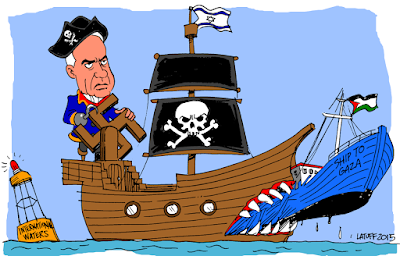 Note the persistent use of the swastika in his depictions.  Latuff has denied accusations of anti-Semitism with the standard leftist response that to be accused of anti-Semitism is to discredit criticism of Israel.  However, surely you can criticise the state of Israel without using deeply offensive Nazi imagery?  Latuff was also entered into the 'International Holocaust Cartoon Competition', shockingly an actual event that has been held in Iran twice.

The banner was reportedly torn down at one point over the weekend, but soon reappeared.  At one point a Jewish activist stood in front of the banner while Sussex Police evaluated whether it had crossed the line.  The activist argued that Merseyside Police had removed the banner when it appeared on their patch, but Brighton's finest begged to differ.  A loon wearing a Free Palestine t-shirt tried to console him, but that didn't go down too well.  Watch the exchange below.

The leaflet being brandished was being distributed to delegates and calls on the party to ban the Jewish Labour Movement (JLM).  It rattles off a Zionist conspiracy theory about JLM (see below, click to enlarge), the author is reportedly suspended from the party. 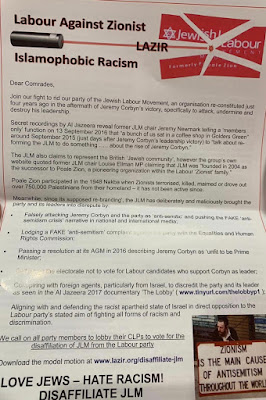 Meanwhile, inside the conference JLM representatives expressed their dissatisfaction with the ruling National Executive Committee, undoubtedly encouraged by the antics of the Free Palestine lobby.  Presumably the Palestinian flags will be unfurled at some point during the next couple of days, as they were last year.

The JLM staged their own event today at Brighton's synagogue.  There was a standing ovation for the previous chair of the movement, MP Luciana Berger.  You'll remember that she is now a member of the Liberal Democrats after being driven out of Labour.  But remember comrades, Labour has no problem with anti-Semitism!
at September 23, 2019