A Labour councillor has apologised for two tweets he posted last weekend in which he expressed a desire to burn Oxford University to the ground with every Tory MP inside it (see below). 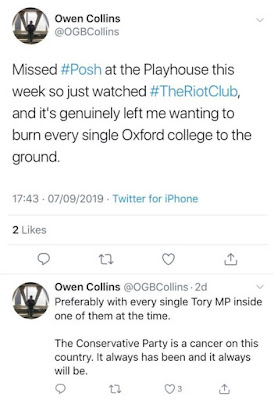 Cllr Owen Collins was elected to West Oxfordshire District Council in May.  On his Twitter profile Collins describes himself as a "socialist" and "feminist", but since the furore over his tweets he has deleted them and locked down his account.  He has now released a statement regarding the tweets:  "Recent tweets of mine contained thoughtless, and obviously flippant, comments, the content and tone of which I regret.  With that in mind, I have deleted the tweets in question and I sincerely apologise to anyone who has been offended by them".

Quite why it's taken him several days to rethink his words is anyone's guess, but perhaps it is linked to the fact his own council group leader has reported him to Labour HQ?