THE HYPOCRISY OF THESE THUGS

Anti-Boris hysteria continued throughout Wednesday over what most ordinary people would regard as fairly innocuous remarks.  Contrast what the PM said with some of the language used by Labour MPs over the last few years and it's tame by comparison.  Yes McDonnell, you're a fine one to talk.  And you too Lammy with your Nazi labels.  Let's not forget also the history of one Jeremy Corbyn in justifying actual murder on our streets by his IRA chums.  The hypocrisy is staggering, but the media is sorely lacking in exposing it.

As if to cap it all off this evening a video emerged of Labour MP Karl Turner confronting Boris Johnson's advisor Dominic Cummings.  Turner's behaviour was akin to someone about to kick off outside a pub on a Friday night, but fair play to Mr Cummings who barely budged from his rather chilled position of leaning up against a stanchion.  "Who's this guy?" he remarks to his companion, "I don't know who you are".  Watch below.

Turner appears to confuse media hype for reality.  It's highly unlikely that people are going to hear what was said by Boris and think that it was anything but innocuous.  It is a surrender bill and it is humbug to suggest that he is to blame for an increase in death threats to MPs.  If there has been an increase in death threats to MPs it is through their own actions in trying to overturn the 2016 Leave mandate.  As for Boris's assertion that the "best way to honour Jo Cox is to get Brexit done" - how is this offensive?  Jo's constituency of Batley & Spen returned a 60% Leave vote, are Labour MPs suggesting that she would not respect that vote?  Are they assuming that she would be as dishonourable as them?  The apology is not Boris's to make.

As for huge Leave votes, how about that of Karl Turner's constituency?  Kingston-upon-Hull East is the fifth strongest Leave voting constituency in the entire country (72.8%), so how on earth can he justify himself to his constituents?  There's shame and disgrace alright, and it's on your own doorstep Karl.  Perhaps that's why you can't accept criticism of your behaviour and like so many of your colleagues cannot tolerate anyone whose opinion differs from your own. 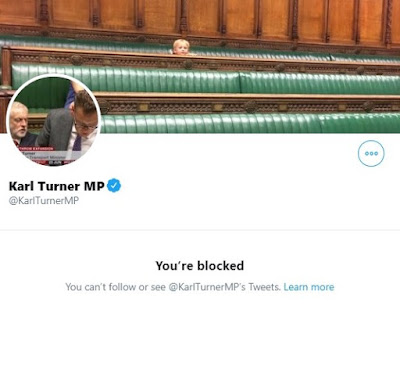 Turner's constituency is another in clear need of a Leave alliance in a general election.  He has a big majority, but just look at the UKIP vote pre-referendum.  The Tories could stand aside here and give the Brexit Party a clear run.  Leave or not on October 31, the Brexit Party will cost you Boris...