When Jeremy finally capitulated and confirmed that Labour would support a second EU referendum, Remainers rejoiced.  However, this lifelong Eurosceptic wasn't going to give them everything.  Last week he announced that Labour would be neutral in a second referendum (like it was in the 1975 referendum).  Cue dummies spat out en masse (yesterday his own MPs were out on the streets of Brighton campaigning against his decision).

Hilariously Jezza told the BBC that a Labour government would implement the result of a second referendum, but hold on a second... 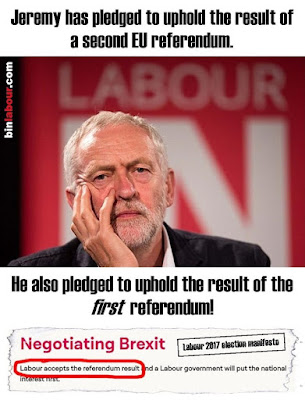