It's been a while, but the Facebook censors have struck again (see below).  We received the notification a few days ago and can only assume that the Dublin-based moderators have no sense of humour.  The post is more than six months old and is the first time they have dredged up an historic post with which to chastise us. 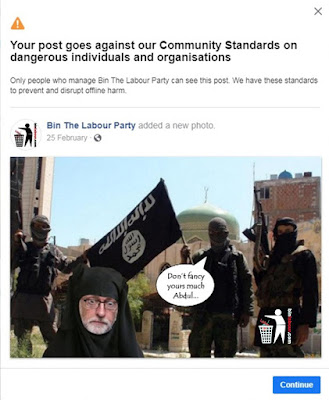 There is no malice here or acts of terrorism depicted.  Are we not allowed to show images of masked terrorists?  That's quite odd seeing as it was revealed in today's news that Facebook has been 'auto-generating' pages in the names of al-Qaeda and Islamic State, among others.  It's almost as if the famed 'community standards' don't apply to Daesh, just to anyone else using their imagery.  It's beyond a joke.

See previous examples of Facebook censorship against us here, here and here.