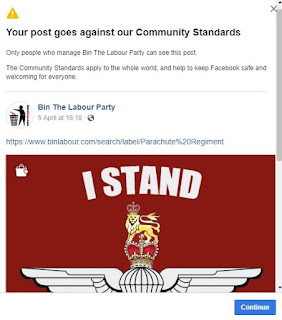 This nonsense again!  A three day ban now in place pending a review of the case.  This is the second time Facebook has removed this meme, having restored it with an apology last time.  In the meantime we can still operate on the back up page.

Last time the review was successful, not this time around.  So much for consistency, the meme is finally Facebook history!  It's no great surprise to note that the Facebook moderators are based in Dublin, so along with the traditional left-wing bias of Facebook, in this case we have the added complications of Anglo-Irish relations and attitudes to the British Army and in particular the Parachute Regiment.

We promised to turn these little inconveniences into a win, last time we produced a t-shirt, now it's a fridge magnet.  Click to buy.