Little Owen has been following in the treacherous footsteps of Corbyn, Abbott and McDonnell for years by pathetically pandering to Irish Republicans.  He makes no secret of the fact he wants to betray our people in Northern Ireland by forcing them out of the United Kingdom.  On Friday he interviewed Sinn Fein' leader - the odious Mary Lou McDonald - not for the first time mind.  It's painful to watch, what a stain on our nation.


Here's why Sinn Féin will never take their seats in parliament, according to their leader @MaryLouMcDonald pic.twitter.com/rtQvorG5fx
— The Guardian (@guardian) 12 April 2019


Meanwhile, here's Mary Lou McDonald celebrating St Patrick's Day in New York last month.  We changed the word "England" to something else to expose the utter hypocrisy of the left. 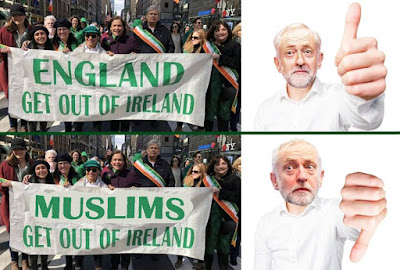