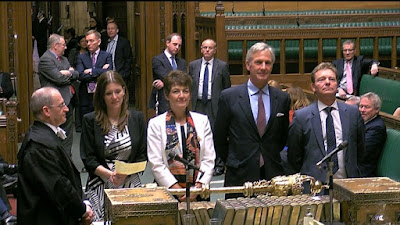 Yvette Cooper's Brexit blocking bill has tonight been signed off by Her Majesty and become law.  The bill cleared the House of Lords earlier this evening before being confirmed by a final vote in the Commons that went 390-81.  There were some very smug faces on the tellers as they announced the final vote (see picture above).  Cooper was also very pleased with herself and celebrated with the following tweet - sure to further endear herself to her 69% Leave voting constituents!


Our cross party Bill now has Royal Assent. Parliament has voted tonight against the damage & chaos that No Deal would cause for jobs, manufacturing, medicine supplies, policing & security. pic.twitter.com/WNn1TazsJw
— Yvette Cooper (@YvetteCooperMP) April 8, 2019


Anyone who is expecting Her Majesty to come to the rescue of this mess is sorely mistaken, she reportedly stayed up late tonight in order to get the bill signed off.  European elections here we come...