Crazed remoaner Lord Adonis has today issued an apology for an outburst he made on LBC Radio last September.  Adonis published the apology on his Facebook page (see below).  In the LBC interview he urged anyone who supported Brexit not to vote Labour (see the video at the foot of this article).  His bizarre posturing astonished former Labour MP Gisela Stuart, who was also present in the studio. 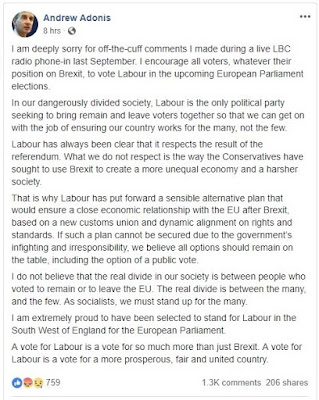 Quite why it's taken him seven months to apologise is unclear, but the fact that he is now running as a Euro candidate can surely be no coincidence.  Selected as number two on Labour's list for the South West of England he is up against it.  Currently Labour only holds one of the six seats in that region and for him to win would require a significant swing away from the Tories and UKIP.  Unlikely, so he is after all the votes he can get.  Hence his apology and ridiculous claim that Labour still - despite all it has done to sabotage Brexit - "respects the result of the referendum".

Are his bizarre outbursts about to be toned down?  This is the original LBC encounter for which he has now apologised...