ADONIS HAS (ANOTHER) BREXIT MELTDOWN

Crazed remoaner Lord Andrew Adonis was cock-a-hoop earlier this week when polls were predicting Labour would win the European Elections, boldly declaring that a Labour victory would be the "end of Brexit".  That was in the early hours of Wednesday morning.  However, later that day a new YouGov poll suggested a surge in support for the Brexit Party would push Labour into second. 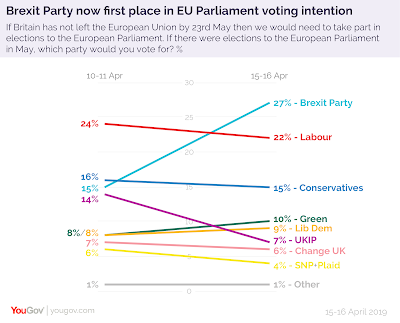 Of course we know opinion polls have been largely discredited in recent years and should always be taken with a pinch of salt.  They failed to predict the Leave result and were woefully off target in the last general election.  However, our loony lord went into a meltdown over the latest YouGov findings... 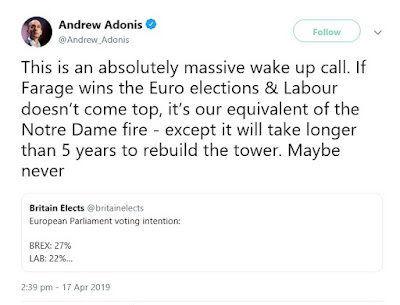 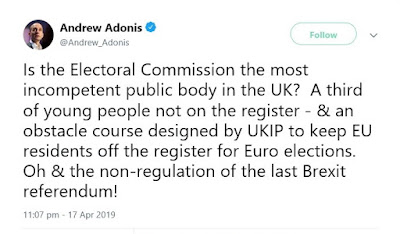 Adonis, who tweets anything up to 50 times a day, has also bombarded his followers with tweets desperately urging EU migrants to register to vote.  Currently the only elections that non-settled EU migrants are eligible to vote in are European elections.  Remoaners are desperate for their votes and are even putting out European language videos, such as this Czech one.  Adonis also has an eye on young voters... 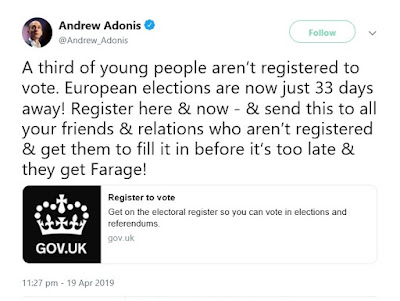 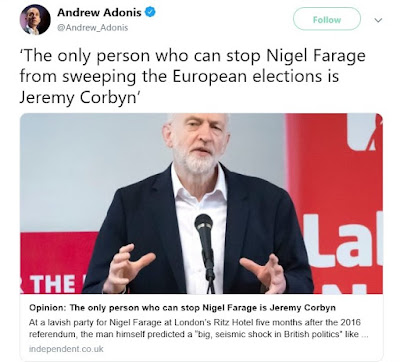 Ironic that the loony lord is now calling out Corbyn as the 'saviour'.  Adonis has never been much of a fan, coming as he does from the New Labour Blairite wing of the party.  Earlier this week he labelled lefty George Galloway an 'extremist'.

Now that Adonis has been lined up as number two on the South West England list of candidates for the European Elections, he will need lefties to support him.  Bad way to go about it labelling a high profile lefty like Galloway as an 'extremist'.

The fact that such a crazed remoaner has been selected says more about Labour than it does about Adonis, but he will have his work cut out winning a seat for Labour.  In the last European Elections the South West returned one Labour MEP, two Tories, two UKIP and one Green.  UKIP topped the poll in 2014 and the region voted Leave in 2016 with 53%.  At number two on his party list Adonis doesn't stand much of a chance.  Tit.
at April 20, 2019