LABOUR OF LOVE FOR LULA 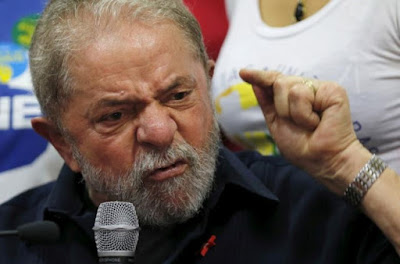 Luiz Inácio Lula da Silva (a bit of a mouthful) is better known as 'Lula' and is adored by the left.  He was the 35th President of Brazil and served two terms before leaving office in 2010.  Last October the youth wing of UK Labour made him their honorary president.  Nothing wrong with that, you might think, except that Lula has been in prison since last April on multiple corruption charges totaling 12 years.

This week a number of senior Labour figures signed a letter labeling Lula a 'political prisoner' and calling for his release.  The letter suggests that the current President of Brazil - nationalist Jair Bolsonaro - is somehow responsible for Lula's incarceration.  However, Bolsonaro only took office this year, long after Lula's conviction and appeals were done and dusted.  The letter also suggests democracy is somehow under threat in Brazil, which at the time of writing appears to be working just fine, with one less corrupt Latin American politician involved in the process!

The signatures to the letter are as follows;

It's a disturbing indictment on Corbyn's Labour when it is seen to support the freedom of convicted criminals, as long as they are from the left.  Just another reason why the mere suggestion of a Corbyn government should send shivers down the spines of every right-thinking person in the land.

Asides from their politics, Lula has something else in common with Jeremy Corbyn.  They are both supporters of Julian Assange, along with a host of international left-wing politicians and luvvies, not forgetting the Russian government.  While Assange may have exposed some pretty sinister and nasty stuff over the years, take one look at the type of people sticking up for him and you'll soon come to the conclusion that he is no friend of ours.
at April 12, 2019