The draft version of the Labour leaflet for the forthcoming European Elections has been causing a stir among its MPs and MEPs.  The failure to mention the party's commitment to a second referendum has enraged remoaners like Owen Smith, Clive Lewis, Chris Bryant and Ben Bradshaw.


We are used to Labour u-turns on Brexit, in fact since 2016 the party position has changed almost as many times as Diane Abbott has misplaced her abacus.  Lifelong EU critic Jeremy Corbyn was probably hoping to sit on the fence during the election period, but 74 of his MPs penned a protest letter yesterday and have reportedly succeeded in forcing a redesign of the leaflet.  It will now include a reference to holding a 'confirmatory vote' aka a referendum re-run.  14 MEPs also signed the letter, after all they would be out of a job if we were ever to actually leave the EU.  A copy of the letter and all its signatories can be found below. 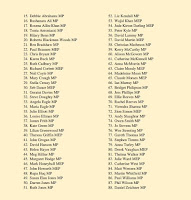 If polling is correct the European Elections will be a straight battle between Labour and the Brexit Party for top spot.  Corbyn's fence sitting strategy may have kept hardcore Labour Leave voters on board, but by repositioning itself as a Remain party (again) this will surely alienate swathes of Labour voters in the Brexit heartlands.  Far from setting themselves up to tackle the Brexit Party challenge, these one-eyed remoaner MPs are making sweet music to the ears of Nigel Farage and UKIP!