GALLOWAY COMES OUT FOR FARAGE

Brexiteer George Galloway has this evening declared he is backing the Brexit Party in the forthcoming European Elections. 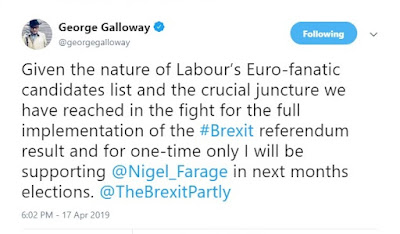 Leftie Galloway also tagged Nigel Farage in his rather unexpected tweet, but the two have a surprisingly amicable relationship, as shown in this very cosy chat the pair enjoyed on Russia Today during the referendum campaign...

Galloway's endorsement of the Brexit Party cuts through the bullshit coming from many on the Labour left about what they label a 'Tory Brexit' or a 'right wing Brexit'.  The "Love Socialism, Hate Brexit" brand flies in the the faces and spits on the graves of so many prominent and respected socialists who have despised the European Union over the years - Tony Benn, Michael Foot, Dennis Skinner, and (of course) Jeremy Corbyn himself - to name a few.

The assumption that Remain is exclusively left-wing is as skewed as the assumption that Leave is exclusively right-wing.  While it is true Labour, the Greens, Plaid and SNP all stood for Remain during the referendum, nearly every single one of the smaller left-wing parties supported Leave - Socialist Labour, the Communist Party, Respect and the SDP.  As the conversation above shows, Brexit can actually unite two ideologies that are otherwise opposed to each other.

Galloway has 300,000 followers on Twitter and with the Brexit Party having stormed to the top of the polls this week, his endorsement can do no harm to their cause whatsoever... 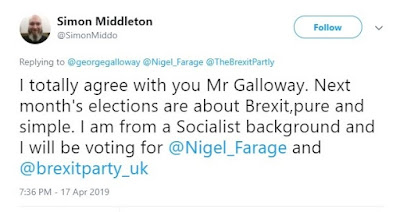 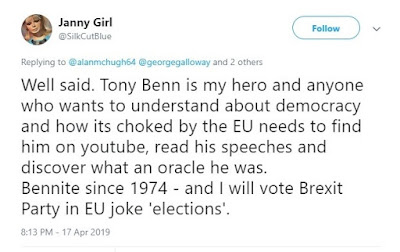