Labour's Yvette Cooper wasted no time following last night's Remain setback.  She has tabled a bill for Wednesday aimed at preventing a no deal exit and extending the withdrawal date (again).  Again she is spinning the yarn that it is not about reversing Brexit, overturning the result etc. blah blah blah.  We've been here before Yvette and we know your game.

In last night's indicative votes Cooper voted for Clarke (customs union), Boles (customs union and single market) and a second referendum.  She abstained on the SNP's revocation motion.  These are clearly the votes of someone who is looking to ignore the referendum result.  The British people voted to leave the customs union and the single market, including a whopping 69% in Normanton, Pontefract and Castleford - Cooper's constituency.  Let's remind ourselves what Cooper put in her 2017 election leaflet... 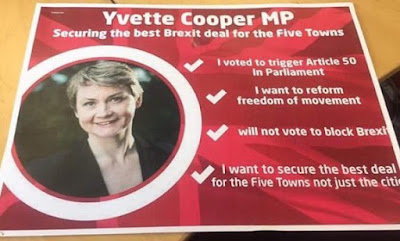