The words 'utterly disgraceful' must have been close to trending on Twitter yesterday as the armchair left went into meltdown.  They were all crying about a bunch of Paras using an image of the Great Leader for target practice, oblivious to the fact that perhaps even hard bastards have feelings.  Dozens of their regimental comrades fell to the bombs and bullets of the IRA, hundreds more from other army branches.  And this action was unashamedly honoured by the likes of Diane Abbott, John McDonnell and, of course, Jeremy Corbyn.  Not only that, but as recently as last month Corbyn suggested that their elderly predecessors should be hauled before the courts over perceived crimes carried out during the Troubles.

There were probably thousands of outrageous tweets yesterday about our lads in Afghanistan, but this one was particularly galling...

Dikerdem is a Labour councillor no less, sitting on Wandsworth Council in London.  Do they teach children about World War II in school these days?  Aydin is in desperate need of a history lesson.  Imagine if we hadn't got these so-called "violent fascists" at our disposal in 1939 and for the six years that followed?  What was it they were fighting? 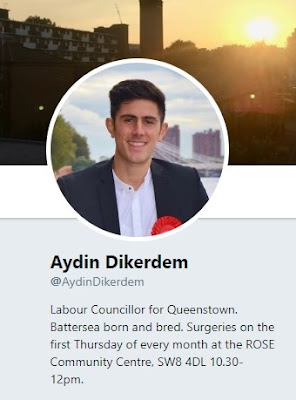 "Battersea born and bred".  With a name like Aydin Dikerdem it's highly doubtful his daddy was, but perhaps therein lies the problem.  It comes as no great surprise that Dikerdum is a 'Free Palestine' enthusiast and a few months ago he boycotted a council vote on adopting the internationally recognised definition of anti-semitism.  If he had been around in World War II it's highly questionable who's side he'd be fighting on.
at April 04, 2019