For the second day running Labour tweeted "Happy St George's Day", having today managed to get the date right at the second attempt.  Shameful.  Both tweets promised four extra bank holidays nationwide, one for each of the patron saints, if the Labour were elected.  Seeing as Britain would likely be on a four day week with these loons in charge would anyone notice the difference?

Jeremy Corbyn kept his own St George's Day tweet short and simple, re-iterating the extra bank holidays.  Surprisingly he failed to inform us that St George was a foreigner, having used his Easter message to lecture us about Christ having been a refugee.  Never one to miss a political point score.

Hope all our English followers had a great day, here's to another year free from the clutches of a Labour government (sorry Wales). 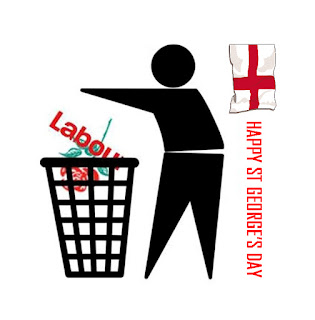