CALL OUT THE SCUM

Since the tragedy Diane Abbott has tweeted about Windrush, Home Office immigration checks, immigration detention centres and demanded an apology from the Tories over Islamophobia.  Like Corbyn she had nothing to say about Notre Dame except for retweeting what a colleague had to say.  That's just lame.  They really don't give a shit when it is Western culture that suffers. 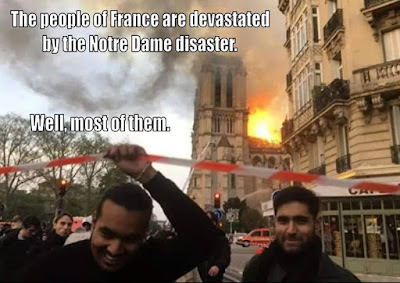 The above tweet is by a left-wing journalist who writes for Rolling Stone and the Independent newspaper.  Ironically she labels herself a 'culture writer' on Twitter, yet revels in the destruction of one of the finest cathedrals in Europe.  As you can see her disgusting tweet has been 'liked' almost 3,000 times.  There's something seriously wrong here.  Imagine a journalist glorifying the Christchurch massacre?  They would be out of a job in minutes.
at April 17, 2019