REEVE'S RESPECT FOR MAY & COOPER 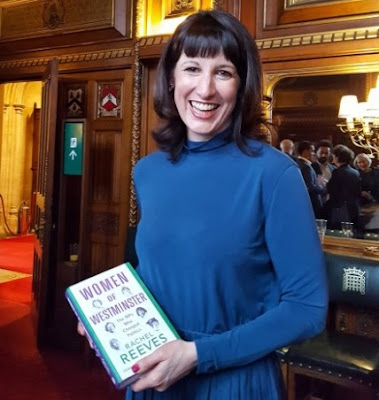 While the chaos that is Brexit rumbles on, one MP is busy promoting a book.  Labour MP Rachel Reeves has written a book entitled "Women Of Westminster".  The cover features various prominent female politicians, including Margaret Thatcher (and Diane Abbott, groan).  The closest person she could find for a female Labour leader to pop on the cover was Harriet Harman.  Say what you like about the Tories you tubthumping Labour feminists, but they've not only had two more female leaders than you, they've had two female Prime Ministers!

Speaking of Prime Ministers, when Reeves was interviewed during a book promo at Waterstones she dropped an interesting soundbite about Theresa May:

“I have got respect for her [May] and what she is doing, but I disagree fundamentally with the Brexit deal she has secured”.
Rachel Reeves MP

What is it that May is doing that garners "respect" from a parasite like Reeves?  Well, put simply, May is deliberately hampering Brexit and history will probably remember her as the woman who killed Brexit.  Labour MPs are cock-a-hoop about the latest setback for Leave as it gives them yet more time to overturn the referendum result and these insidious remoaners include the member for Leeds West - Rachel Reeves.

Reeves publicly supports a second referendum, but will literally vote for anything that undermines Brexit, as shown in the last series of indicative votes.  When Speaker Bercow selected four Remain options for MPs to vote on, Reeves joined 84 of her colleagues in voting for every single one of them.

Of course this is completely at odds with her 53% Leave voting constituency, but how many times have we heard that?  With a huge majority Reeves is clearly unfazed about not reflecting her constituents' decision, a bit like another Yorkshire MP that we are more familiar with - Yvette Cooper.  The two of them have a lot in common, more besides Brexit blocking.  Neither of them were born anywhere near Yorkshire, both having been raised in the south of England and both of them worked in the United States before building lofty careers for themselves (Cooper as a politician, Reeves as a banker).  They are about as establishment as they come.

Reeves has indicated that she would support Cooper in the next leadership election, assuming Yvette is prepared to have another go.  Like peas in a pod, as long as that pod is stuffed full of cash and remains attached to the European Vegetable Union.
at April 11, 2019