Mild mannered ex-England footballer Peter Shilton has fallen foul of Corbynista/Remain trolls.  Shilts is pro-Brexit, but the abuse followed a series of tweets he made last week that included broadsides at both May and Corbyn (see below). 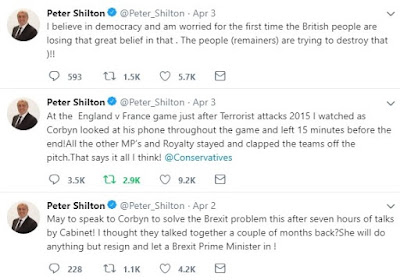 One particularly cowardly git managed to get hold of a mobile number belonging to Mrs Shilton and began sending her obscene and abusive texts, most of which seemed to revolve around a fascination with the infamous 'Hand of God' goal.  "You're getting fingered by someone who got outjumped by a 5ft 5 midget" was one of the lovely messages she received.  Another was threatening in nature and said that her husband should "watch his back".  Shilts tweeted a screenshot of some other examples. 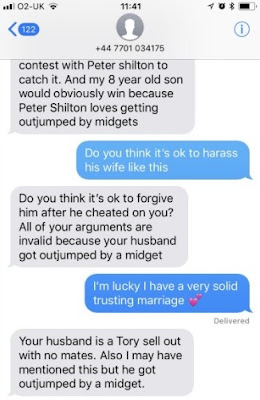 We reckon this is the handiwork of loony left Corbynistas angered by his Corbyn tweet rather than remoaners upset about his Brexit stance, but with a phone number to hand surely a prosecution will be forthcoming?
at April 08, 2019