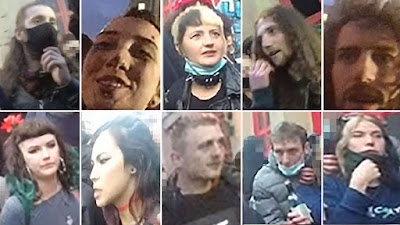 Avon and Somerset Police have released photographs of ten suspects they are seeking in relation to last Sunday's violence.  Despite the prevalence of face masks in society, there appear to have been plenty of rioters not that keen to hide their faces.  Of the ten images released only one suspect is seen wearing a face covering (Suspect A).
The Bristol rogues' gallery can be seen in all its ugliness below (click photos to enlarge).
If you have information relating to any of these degenerates, Avon and Somerset Police have set up a special website where you can provide details.  Remember that among the many crimes committed by the Bristol rioters was the burning of a police vehicle while officers were still inside.  Another officer was stamped on so hard that he suffered a punctured lung, while another had his arm broken.
Let's hope that the force has learned a valuable lesson from last year's hands-off approach to the toppling of the Colston statue.  Time to get tough!
at March 25, 2021