As has now been proven beyond all doubt, the death of Sarah Everard is being exploited by far left groups.  Earlier this week there was talk of another protest in London planned for Thursday night, but it appears that this has now moved online.  One of the main agitators in the initial protest last Saturday was a group called Sisters Uncut, as shown in the large banner that was hung up on the bandstand in Clapham Common.
Note the 'No Cops' message on display.  Hatred of police has been a strong theme of these protests, something that makes little sense if the activity is merely about women's safety.  Hatred of police was also rampant during last year's BLM protests.  The two sets of protests are inextricably linked and it's no secret.
The virtual meeting taking place tonight has been arranged by Sisters Uncut in conjunction with BLM and other leftist groups.  The tweet pictured below links to an event page that lists speakers from Sisters Uncut, BLM, Public Interest Law Centre and No More Exclusions.  The Public Interest Law Centre is run by Paul Heron, who describes himself as a socialist lawyer.  No More Exclusions is a black organisation dedicated to halting expulsions of black schoolchildren.  What has this got to do with the death of Sarah Everard, a white middle class woman?  Absolutely nothing, these groups and their footsoldiers are exploiting this woman's death to further their own Marxist agenda of division and social unrest.
It's not even about feminism, for if these people were real feminists they would not simultaneously be embroiled in the trans lobby.  "All genders welcome" it says at the end of their event spiel, something echoed in the tweet that led to their protest on Saturday night, which incidentally also asked participants to "bring all their rage".  Peaceful protest?  Look at the explosive emojis on display below... 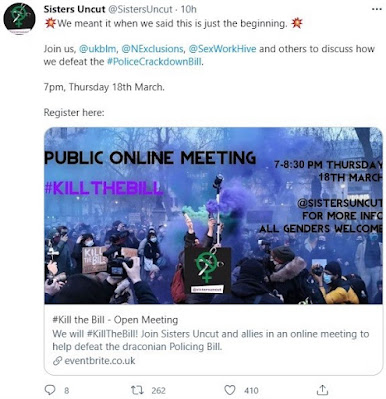 If you want to see exactly what these thugs are up to and what they're planning, a ticket for the online event is free and does not require anything more than a name and an email address.  Click here.
at March 18, 2021