The pathetic kneeling gesture was once again deployed only by England in the latest round of Six Nations matches.  However, for the first time in the tournament more England players stood rather than take the knee, including captain Owen Farrell who had dropped to his knee in previous fixtures.  Against Wales on Saturday ten England players knelt and 13 stood, while the Welsh maintained their 100 per cent record of ignoring the custom altogether. 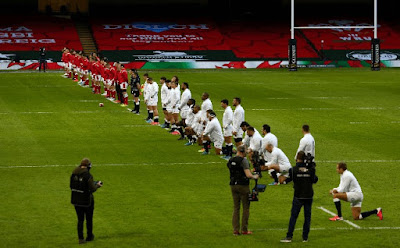 Wales won the game 40-24 and now lead the championship, while England uncharacteristically languish in fourth place.  Some fans are beginning to attribute the divisive kneeling gesture to England's poor tournament.  No other teams have knelt during the Six Nations with the exception of four Scotland players who did so in their first match (probably out of sympathy towards their pathetic opponents in that game - England).
France are next up for England.  Will the players embarrass themselves again in front of such bitter rivals before a ball is kicked?  Kick Marxism Out!
at March 02, 2021